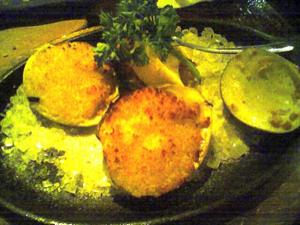 Went to Wildfire a while ago with jB on the recommendation of friends. It's supposed to be a 40s style supperclub, so of course I was hoping for actual dancing and waitstaff in faux-40s outfits, but I guess you can't have everything. It's got just a whiff of the chain that it is, but you can't argue with gorgeous fat steaks and Basil Hayden bourbon and clams crusted with buttery horseradish crumbs and run under the fire. Good food, and just the ticket for certain sorts of occasions.

how to dramatically improve a ham sandwich

Thinly slice up a celery stalk. Thinly slice up an apple (or half an apple if it's big; eat the rest for dessert). Shave in a bit of manchego. Grind in pepper, drizzle in a little olive oil and sherry vinegar. Shake it all up. Eat with the ham sandwich, and revel in the tangy savory sweet goodness.

Bacon Night at The Harris Grill

Bacon Night at The Harris Grill
Originally uploaded by Patrick58.

Ok, so... due to my posting of the Thanksgiving day bacony-goodness on Flickr, I was alerted to the Flickr BACON group, a group dedicated to pictures of bacon.

How freakin' awesome is that? I mean, is that not like the best idea ever?

Well, actually no. No it's not. The best idea ever is Bacon Night held at a barcafe in Pittsburgh. (Although, credit where credit's due -- I wouldn't have found out about it without the Bacon group.)

"Yeah, so... The Harris Grill on Ellsworth is now doing this promotion... Tuesday nights, free bacon at the bar. No, really, I'm serious. Free bacon. In a basket. They keep bringing it."

Holy crap. No wonder Pittsburgh is considered to be one of the best places to live in this country.

Went out with a friend on Saturday evening; we wanted to go to Blackbird, but couldn't get a reservation, so we went to Avec and sat at the bar. The space really is cool, feels like a sauna with all that wood on the walls and ceiling, and it's remarkably tiny for such a high-quality kitchen. However, the hipster see-and-be-seen quotient is enough to make you gag. Happily, we'd already had two dirty martinis apiece at Gene & Georgetti's so we were tiddly enough to just ignore everyone. Except the guy to my left, who kept getting plates of things that smelled amazing, so I kept leaning over to bother him and find out what they were. Thanks to him, we ordered an extra unplanned dish that turned out to be one of my two favorites of the evening, a buckwheat pasta with red-wine braised rabbit. Simple, light but intensely savory, a wonderful combination of subtle flavors.

The other favorite was another simple thing, a shaved apple and celery salad, with slivers of manchego and a cider vinaigrette. I immediately ran out the next day to buy a bunch of celery to go with the apples in my fridge.

There was also some crispy-fried flanken short rib in harissa aioli, very nice, and chorizo stuffed dates with bacon and a piquillo pepper sauce (hubba hubba), and some lovely soft blood sausage with apples and watercress. Our other entree was the oven roasted pork shoulder, which was utterly monstrous. Huge. Bizarrely enormous for this kind of restaurant. And almost completely meat -- there wasn't nearly enough of the very tasty sauerkraut to properly accent each bite of meat, and the two of us together didn't have a prayer of finishing off that pork. I took the remains home, and ate it for lunch today, and even that mere fraction was filling. Yummy though. ;-)

We had some cheeses to finish, a garrotxa, a pave d'auge that was okay, and an epoisses that I enjoyed but my friend found too stinky. And then we lurched home to lie down and groan. Note to self: no meals too delicious to stop eating after knocking back two martinis and about 8 giant olives. Ooof. 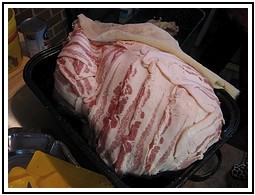 The annual brick oven turkey was freaking awesome this year -- we have hit upon the perfect formula. If one pound of bacon was good, two pounds of bacon is better. You get fantastically crunchy mahogany skin, moist smoky well-seasoned meat, and that inner layer of bacon isn't too burned to eat either, if you let the temp get a bit lower at the start than we have at times in the past. Woo, baby! Yum.

So obviously I've been eating the leftovers this week, along with lunches from where else, Perez. Very nice pork chops braised in spicy sauce yesterday -- $6 for two hot lunches, can't beat it.