I ran across Just Bento, the sister site to Just Hungry (which appears to be back in action and at full force, yay -- i was sad when she went away for so long awhile back), and I've been highly distracted by it of late. I love japanese food, but I am often overwhelmed by lack of recipes and don't cook it at home as much as I would like. The stuff on Just Bento breaks it down and makes it seem much more simple, as I suspect it has been all along.

And reading all that got me all fired up and I cooked a bunch of stuff -- lotus root kinpira, sesame-garlic spinach -- and I went off on a tear to the korean market in town and came back with a bunch of stuff I totally didn't need: magenta eggplant pickles, water-packed wild mushrooms, frozen tamagoyaki. 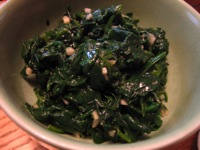 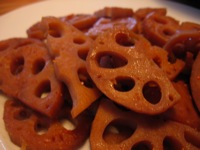 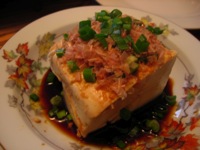 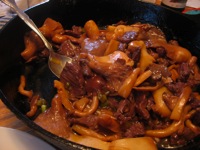 And that all manifested itself in last night's dinner, consisting of rice, pickles, spinach, kinpira, soft tofu with katsuobushi & scallions & soy plus a bit of the fresh wasabi root I dragged back from Uwajimaya in Seattle, and beef & mushrooms in a soy-mirin glaze. The wasabi didn't really need its own little dishes, but i was rushing a little and didn't think through the plating properly. :)

This was delightful, and just what I felt like eating on a not-quite-warm spring evening. My husband may be of chinese origin, but i get no complaints about japanese dinners, heh. And this is the bento I made as I put away the leftovers: 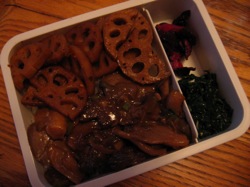 PS: recipes for this stuff are in my head, which perhaps is why it all felt so much easier.

spinach: wilt baby spinach either in water or in a pan with the wash-water clinging, then squeeze out as much as you can. chop with a knife, then mix in a clove or two of fresh minced garlic (you can mush it together with some salt if you didn't salt the cooking spinach and you want it less chunky), a teaspoon or so of sugar, and a li'l splash of toasted sesame oil. a dash of soy sauce is ok too, if it needs salt. mix together, keep in fridge. good with japanese or korean dinners - this is technically a korean recipe.

kinpira: buy a package of sliced lotus root or burdock, drain off the water, and put into a skillet with a bit of hot peanut oil. coat the veg a bit, then add braising liquid -- soy sauce, sake, mirin, more or less equal amounts but in whatever proportions you like. I go a little heavy to the mirin, since i don't add sugar and this recipe had no sweetening carrot in it. braise covered until things start looking brown - you can flip them around so all sides get equally brown, and add liquid if you don't think they're done enough yet. take the lid off at the end to evaporate the last of the liquid. lotus root stays crunchy, so what you're looking for is depth of flavor and color, and absence of liquid. at the end sprinkle with shichimi togarashi (blend of sesame seeds, seaweed & hot peppers, mmmm). this time i added some chili flakes to the braising step, to see if that would give a deeper layer of hot aside from the surface heat of the shichimi togarashi sprinkle, which it did... i got this idea from the kinpira gobo i had at Maneki in Seattle which had no sprinkle at all but packed a hell of a wallop.

tofu: get a block of soft tofu and stick it in a bowl. pour over some soy sauce. when ready to serve, sprinkle over some chopped scallion and shredded katsuobushi (bonito flakes that you buy preshredded in packets). offer wasabi if you like -- it's non-traditional, but we both thought it added something nice to the flavor combo.

beef-n-shrooms: buy a bag of mixed mushrooms (or get fresh), and a sirloin tip. cut the sirloin tip up small and marinate in soy sauce & mirin for 10-30 mins as you make the rest of dinner. heat skillet to hot with some peanut oil, then add the meat, stir a bit (watch out for spattering if you are too lazy to drain it properly like i am), then add the mushrooms. dump in the rest of the marinade and cook till everything is cooked through. if you want thicker sauce, add a tsp or so of cornstarch at the very end. 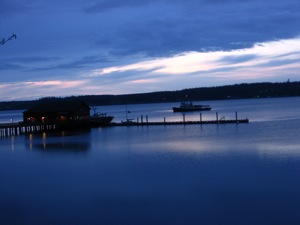 This is the view from the sidewalk next to Toby's Tavern in Coupeville, WA on Whidbey Island.

I stopped there with my brother and his sweetie-pie for beer and mussels of very high quality, in a snug divey setting with a great view and barely-marginal service. Eh, whatever. Mussels yummy. Beer good. Ogg like mussels and beer. 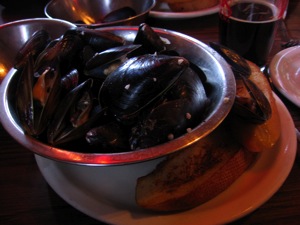 i love sushi, yes i do

extra special temporary contest, while you wait for me to get around to the actual post: can you identify the beer? the rectangular sushi? the brace of sushi next to the beer? 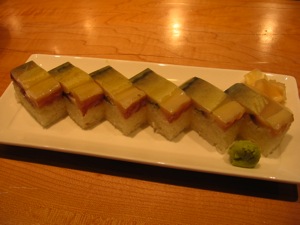 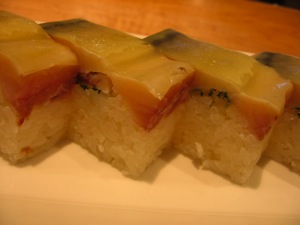 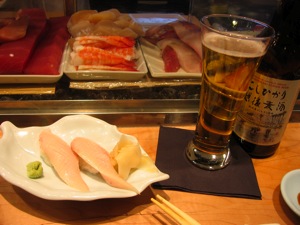 Ha! You are awesome! Chris wins the prize for correctly identifying two out of three (see comments), and really, the photo is too small to get the beer. Yay, I love the internet!

Those photographs are from I Love Sushi on Lake Bellevue in Bellevue, WA, and show a Koshihikari Echigo rice beer next to some hamachi toro (allow me to assure you that it IS indeed all that), and also a plate of what they called saba battera, or pressed pickled-mackerel sushi, a treasure I have been trying to find since I came back from Japan in 1996. It's a regional preparation from Kyoto & Nara, inland places that needed to more thoroughly preserve their fish and rice, and so they pickled the fish, and pressed it tightly into rice blocks, and the two kept each other fresh on the trip inland. And tasted damn good when they got there, as pickley, fermented things tend to do.

I watched carefully at the sushi bar as these were made, as it's not just saba and rice. There is also a thin yellowish slice of kelp, apparently slightly sweetened in cooking, laid over the top, and mitsuba leaves underneath the fish. I was so happy eating these, and drinking my vat of mild, pale, faintly rice-tasting beer, idling my evening with pleasure looking out over the tiny lake and chatting with my new pal Joe the sushi chef who used to live in Vancouver when he first came to North America from Tokyo.

Ay yi yi, tallasiandude points out to me that there are NO POSTS again. I SUCK. My profoundest apologies to all of you who actually read this blog, since the fact that any of you actually do that is a source of much pleasure for me. Work stuff has gotten a little out of hand again all of a sudden, just as the spring has been springing, and the last thing i've wanted to do when the day's last mole has been whacked is stay in front of the computer. So I offer my apologies, and this photo, of my latest meal: 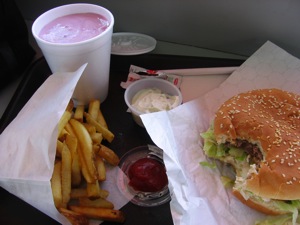 I ate this at Scooter's, on NW 24th in Ballard (Seattle), for lunch just now. I came out to Seattle for a training course, and stayed a few extra days to visit my brother and let him point me at all the edible treasures Seattle has to offer. (The nice thing is, after fighting like cats and dogs much of our lives because of a 5 year age difference, we have come out as very similar adults: i'm a foodwhore, he's a foodwhore. we have the same kitchen implements, down to the peelers and the shape of our cereal bowls. it's a warm fuzzy, really.)

anyway, lunch was a cheeseburger, small fries, and a mini-blackberry-shake. With ketchup and tartar sauce for the fries. Yums. It's just the sort of burger I like, all flat and skinny, with american cheese and "scooter sauce" all mushed in with the pickles and lettuce and tomatoes. Crispy fries. Creamy shake, with just a shade of berry flavor peeking through the creamy, though I can tell there was real fruit in it since I had to pick the blackberry seeds out of my teeth when i got home. Not bad for walking distance from home...