you'd do it too, if you could

photo of the day at dooce

After the architecture river tour, which was awesome but did involve being outdoors and seated for 90 minutes in 50 degree drizzly weather, we went to Frontera Grill for brunch. (So that in theory we could go to Resi's Bierstube for dinner, b/c it doesn't open until like 3pm. We didn't go, but that's neither here nor there.)

They told us there'd be an hour's wait, but we couldn't have been there more than 20 minutes -- we checked out the cookbooks and the amusingly-attired fellow patrons and weren't even close to bored yet -- when we were ushered to a corner banquette, perfect for sharing an excessive amount of food. The cocktails all sounded so appealing that we threw our better judgement to the winds and ordered a pair of the bloody marias and a limontini. Both of these were some of the best cocktails we've ever had -- the bloodies were spicy and complex and had a knockout dose of lime juice, and the 'tini was made of homemade lime-infused tequila, orange juice, mint, and a splash of damiana, which gave it a floral/bitter note that was perfect against the sweetness of the orange and mint. 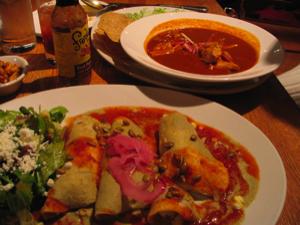 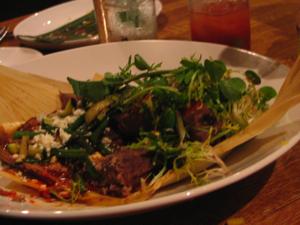 We started with a halibut ceviche tostadita, a jicama/citrus salad, and sopes rancheros, tiny little masa cups filled with the most delectable braised beef in chile sauce and a sprinkle of dry white cheese. These little morsels were the best thing we had on a tableful of delicious dishes -- get them if they are available when you go.

Then we had posole, a richer, more refined version of the stuff I love so much from Perez, with limes, shredded curly cabbage and tostadas on the side. We had Tamales de Frijol con Queso de Cabra: black bean tamales filled with homemade goat cheese in guisado of wild and woodland mushrooms, organic roasted tomatoes, green chile and mint, with watercress and green bean salad on the side. We had Papadzules Yucatecos: classic Yucatecan enchiladas of homemade tortillas bathed with savory, smooth pumpkinseed sauce, rolled around hardboiled egg, topped with habanero-sparked roasted tomato and pickled red onion, with Frontera salad (lettuce, raw beets and dry white cheese) on the side. Now this dish was unexpectedly quite bland, with nary a habanero to be detected, but with a dose of the hotsauce from the bottle on the table, that particular problem was fixed right up. And we had pickled veggies & jalapenos, and fried plantains with crema and more of the dry salty white cheese. *drool* 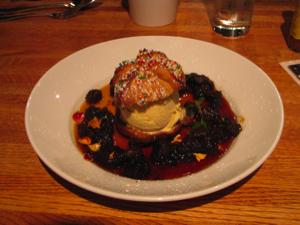 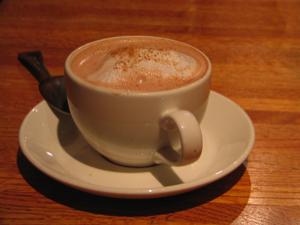 And just as we were patting our bellies in stuffed contentment, our (hot, friendly) waiter brought us a dessert menu. Now I ask you: would you be able to resist something described as brioche-style bread with pumpkin icecream and syrup-steeped pumpkin and dried figs and cherries soaked in tequila? I didn't think so. And then there was the matter of the hot chocolate with mezcal & cinnamon, which was so utterly perfect I would go to Frontera Grill just to have it for dessert. The mezcal gives it a smoky sharpness that works wonderfully with the cinnamon creaminess of the cocoa. And at this point, our waiter had been chatting us up (which is usually annoying, but this guy was just friendly enough, and then he'd go away and leave us be), bringing us a little info-sheet on the mezcal, describing where it's grown and how it's made, and generally being adorable -- and then he gilded the lily by pouring us a cup of cafe de olla, which we didn't ask for and he didn't charge us for, despite the refill, which we had to have, because this stuff was so fantastic.

The link I've posted is to a different style of the drink, similar to the one our waiter described as what's made in Jalisco, where he's from, but Frontera's version is Oaxacan. For a pot of coffee (a mild but nutty coffee would be good), add two cloves, a cinnamon stick, some orange zest, and some piloncillo to taste, piloncillo being Mexican dark brown sugar that comes in little coneshaped chunks. You don't want it very sweet, just enough to bring out the spices and citrus flavors. Holy crap, this stuff is incredible -- it's like Christmas and summertime all rolled up into one thing and poured into a cup. Again, worth a trip to the Frontera bar just for this.

Now, I have a strange aversion to Mexican art, and Frontera's decor pretty much hits all the notes I find annoying, from the font of their logo to the primitive art on the walls, but I would happily sit in that room for hours eating and drinking the fabulous things that come out of Mr. Bayless's kitchen. I love that he is so overwhelmingly nerdy about regional Mexican recipes, and so passionate about using local and organic ingredients, and the result is a warm, comforting cuisine that is stimulating and complex without being remotely formal. I worried a bit that the emperor might have no clothes, because destination restaurants sometimes have that problem, but in this case, the emperor was amply clad indeed.

littlelee and spleen came to visit this past weekend, and we packed in a hell of a lot of chicago eating, along with a few touristy things I've been meaning to do since i got here. :-)

The architecture river tours are totally worthwhile. Alcala's Western Wear is worth the trip, and spleen bought herself a pair of cowboy boots in black & a lovely caramelly brown. We also went to see a live taping of Wait, Wait, Don't Tell Me, the NPR news quiz show, which was hilarious in so many ways, not least of them being how much new information we learned about current events. We're lame, yes. Or maybe just hiding from the horrors of reality.

Anyway, we also went to Supermercado Morelia (7334 N. Clark St., 773-761-3291), which i learned about from Cindy and have been dying to visit. It didn't have any of the exotic citrus she described but it did have some fabulous wafer cookies filled with cajeta, the yummy goat-milk caramel. There was also some gorgeous looking roasted pork in the hot case, but the place was a zoo, so I didn't wade in to get any. I did snag some dried chiles with which to make posole, and some Ibarra chocolate, since there's now a palpable chill in the air here in Chicago.

The girls got their minds blown by Devon St, where we ogled fabulous gold jewelry we can never afford, and bought some of the wonderful snack mixes at Ambala. We had some gorgeously fatty barbacoa tacos at La Pasadita. We had elotes, which they agreed are completely disgusting in theory but completely delicious in reality. We hauled our asses to Hae Woon Dae (6240 N. California) and knocked back a respectable quantity of soju and OB lager with our friend E, also serendipitously in town the same weekend for a bachelorette party, along with exceptional kalbi, delicious spicy pork, a mediocre spicy soup, and an oddly-buttery-but-delicious version of kimchi bokum.

We also went to Frontera Grill, but that's a whole post in and of itself. Rick Bayless is my hero. 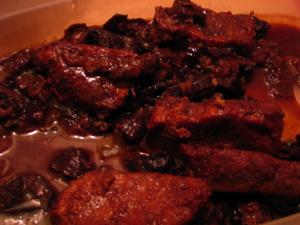 Salt & pepper the pork. Sprinkle with a bunch of flour and dredge well. Heat olive oil in a large deep skillet or dutch oven and brown the meat well on all sides. Add the butter, and when melted add the shallots. Saute till shallots start to go clear, then sprinkle a bit of the allspice over everything, and keep frying. Add 10 juniper berries, several tablespoons of vinegar, a splash of bourbon, and maybe 1/4 cup of sherry. Put in the prunes, cut up if you like, and the broth. Bring to simmer, and braise for a good long time. I covered mine for a while, but then left it open to reduce. I forgot about mine completely, so it stewed for at least 2 hours and nearly burned, but the meat got all nice and soft and the sauce is thick & velvety.

my brother is so cool 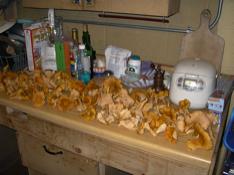 He has friends who give him freshly foraged chanterelles. And this is what they do with them:

"Favorite recipe of the
moment, in addition to dead ass plain:

Sautee over medium/high with no oil. Allow to cook in its own juices until
1/2 cooked. Add a tablespoon of butter and a splash of white wine. Reduce
by around 1/3, and add some heavy cream. Return to a simmer for a minute or
two. Salt/Pepper. Eat.

why the italians deserve their reputation

Because they are capable of producing dishes like the one we ate in a neighborhood osteria in Milan, near our friends' apartment, called La Piola. Everything that came to the table for the four of us was spectacular, but the porcini risotto was just completely out of control in its exquisite deliciousness and intense mushroominess. A true foodgasm.

All the risottos we had on the trip were perfectly cooked, exactly the right texture of soft creamy with a firm bite, even the ones at the wedding. Since when have you ever had good food at a wedding? Same goes for the gnocchi -- fluffy little cloud-pillows robed in cheese. Hot damn.

Sadly, we'd left the camera in the friends' apartment during dinner by mistake, so no pictures of the foodgasm. You'll just have to trust me.

while i get organized

to post about my food adventures in europe, here is what i made for dinner last night. There was a big sale on beef chuck roast at Whole Paycheck, and I'd been eyeing the daube provencale recipe in Cook's Illustrated, and this is what happened. 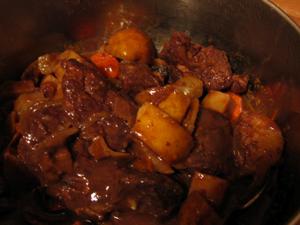 Put the oven on 325F. Trim the fat from the roast and cut it into big chunks, 2-3" or so. Salt & pepper them, then brown in olive oil in your dutch oven. Take them out when brown on all sides, and add a bit more oil, along with a sliced onion, 2-3 carrots cut into chunks, and 2-3 potatoes (i used yukon gold) cut into chunks. Sprinkle with salt & fry until they've taken on most of the color from the brown bits on the bottom of the pan, then sprinkle them with several tablespoons of flour and cook until it browns. Add in most of a bottle of red wine. Also add 2 cups of hot water in which you've soaked some broken up dried shiitakes and about 1/4 of a bouillon cube that was left over. Add some dried thyme or savory, a bay leaf (i didn't have one last night, fresh out), a few shots of vietnamese fish sauce, a tablespoon of harissa, a cut up head of fennel and strips of zest from about half an orange. Bring it up to a simmer, then put the meat and juices back in, submerging them. Add some olives if you like. Bung it in the oven with the top on partially and leave it there for 3 hours. You might want to stir it once or twice as the surface does get a bit grotty looking from the dry heat. Makes the house smell lovely. The magazine recipe asked for tomatoes and parsley at the end, but i just ate it as it was and didn't miss them.

while I'm at it

I have been so busy lately that I was reduced to a bbq-sauce drenched rotisserie chicken from that overpriced hellhole, Jewel -- and my roommate bought it since i didn't have time to go to the store. That'd be why there's been no posts lately. But fear not, I am going to Italy and Amsterdam, and there be good eatin' in those parts. Stay tuned next week.

I don't generally want to drag politics into this blog, but you have got to be kidding. Never served as a judge? Fucking hell.