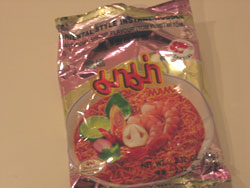 it's raining in chicago and I'm feeling like I'm coming down sick, so today when the roommate started ordering Thai takeout, I said I wanted some tom yum -- spicy sour soup. But he said it was a total ripoff at the local joint, 6 bucks for a cup of soup, so i bagged it -- but the craving didn't go away. Happily, the resulting brainwave combined with two packets of the roommate's thai ramen (tom yum flavor!) to become some great comfort food.

I've said it before and i'll say it again: ANYTHING, particularly a soup, that involves both fish sauce and lime juice is by definition yummy.

Chicken broth and water, boiled with some dried shiitakes thrown in, ramen noodles added along with spice packets, half a can of leftover diced tomatoes, juice of half a lime, and scrambled egg dribbled in as egg-drop. Squeeze more lime in to serve. We ran out of cilantro or there'd be some of that in there too. Sour spicy hot broth goodness. 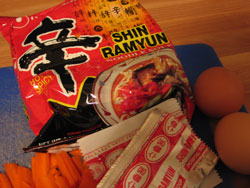 sometimes when the world is just too horrible, you need something comforting. And more often than not, especially for tallasiandude and increasingly for me, that thing is spicy korean ramen, with egg poached in it. Takes 5 minutes, costs a dollar, and is hot and soupy and spicy and brothy goodness. It's gotta be this particular kind of ramen, though, or it's not as good. And lately I've started putting in carrots and canned tomato as well, which makes it into more of a stew. 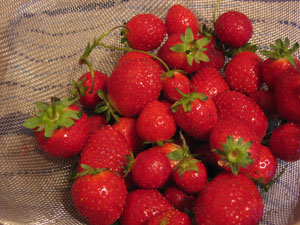 Found these strawberries at the farmer's market, and was unable to resist their adorable tininess and intoxicating fragrance. I ate them with a bit of sweetened sour cream, which actually was a bit like Icelandic skyr. Dreamy. 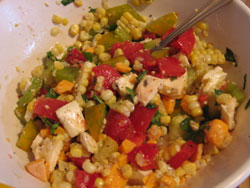 For the second summer running, I've been eating variations of this dish practically every other day since the beginning of August. Can't resist it. Tomatoes, corn cut off the cob, some kind of cheese, vinegar & oil, salt & pepper, plus other stuff as available: herbs, zucchini, peppers, whatever. Takes less than 5 minutes to throw together, ingredients hold well over the course of a busy week, intensely satisfying yet light and healthy.

I had to get up early yesterday morning for class, so I ended up listening to some pre-8am NPR on my return to consciousness and discovered Living On Earth. Sure sounds like crunchy-granola hippy-liberal NPR radio to me. (Not that I necessarily mind, per se.) But I guess I often find the commentary to be just soooo depressing, and occasionally it gets this holier than thou tone that can certainly get old... but this particular show, at least on this particular morning, I just found to be interesting listening -- cool stories that just happen to have something to do with people interacting directly with the the earth. (That's little earth, not big, capital-E save the world Earth. Again, not that I mind. Interesting that I'm so self-conscious about it though. Somehow, giving a shit about the environment has suddenly become a BAD THING(tm). But I digress.)

First up, a story about eating food grown locally. (well, not actually up -- I was half-asleep. I dreamt of apple trees and cider as the commentary seeped into my brain.)

McKIBBEN: ...I don't think I'm ever going back to eating the way I used to. I could give you a lot of good reasonsthere's a British study, for instance, that just came out proving that eating local helped the environment twice as much even as eating organic. But all that's just an excuse. I'm hooked on the connections to the place I live. I spent the winter eating with my mind as well as my tongue, consuming connections along with my calories. It was the best dining I've ever done.

This was followed by another story that was a shade "closer to home" as it were, as I've been chowing down on the tomatoes (some brandywines amongst them) that we've been growing in the front garden.

GELLERMAN: These days at harvest festivals and county fairs you can find green thumb growers showing off the fruits of their labors--local produce grown with care and pride...and can anything be more worthy of a boast than a delectable tomato, ripening on the vine right in your own backyard? Especially those heirloom varieties, the ones with odd shapes, colors and names to match. There are the Tommy Toes, tiny as grapes, Brandywines, deep red as a glass of cabernet, and Banana Legs, yellow and yummy. Living on Earth's Jeff Young was curious about one of his favorites, a tomato with an especially peculiar name, and he discovered a story behind it as colorful as the fruit itself.

The stuff you grow yourself really does taste better, but it's also nice to know that it could potentially have a positive environmental impact. I've been riding my bike to school, too. So I guess that makes me even more of a stereotypical NPR-listening commie-pinko. Oh well...

There is a Chipotle near one of my clients, and so I've eaten there now several times, and I am truly impressed by both the yummy factor and the consistency of the yummy. I think my favorite so far is the barbacoa burrito with hot red salsa -- if i go for the green salsa I end up having to slather on lots of chipotle tabasco for spicy smoky goodness, which is certainly not BAD, but is more labor intensive. :-)

And it strikes me that the metal-and-wood industrial aesthetic is not just pretty but probably has a lower build-out impact (in both dollar and environmental costs) than your average plastic-coated fast food site. And if they really do use organic and small-farm sourced foods the way they say they do, then I don't care if McDonald's owns them. A company that gives me fast, cheap, unreservedly tasty meals, while being easier on the environment and the farmer, is certainly welcome to stay in my world. Now all we need is a few more Pret A Mangers and we're golden.

the next food network star

OK, so I totally got up early on a Sunday morning to watch their new show, Party Line, and it was awesome. First of all, crab and cream cheese stuffed into a pepperoncini? YUM. And then spinach-parmesan balls that are easy as can be and sound dee-lish. Plus, how do you not love a hot hors d'oeuvre that throws together quickly, holds well and is probably just lovely at room temp? AND is wegemetarian friendly. Folks, we have a winner. 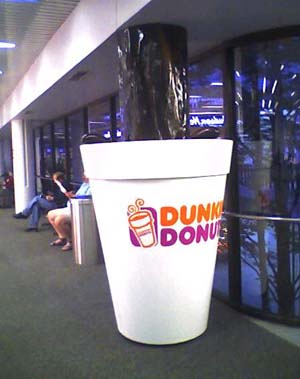 Throughout Terminal B of Logan Airport, instead of pillars they have monstrously huge go-cups of Dunkin' Donuts coffee, complete with kicky little splashes frolicking along the rim of the cup. Surreal, endearing, and creepy all at the same time. *shudder*

From the Metromix blurb on La Oaxaquena:

"Seafood includes the huachinango a la Veracruzana, a whole red snapper served Veracruz-style in a zesty garlic and onion tomato sauce. Salads and sandwiches, like the signature torta of grilled tenderloin with chorizo sausage, beans, avocado and Mexican mayonnaise are lighter options."

In what universe is steak + sausage + avocado + mayonnaise lighter than fish in vegetable-tomato sauce? Oho, how I laugh. Ha ha ha. Guffaws of laughter. Sigh. 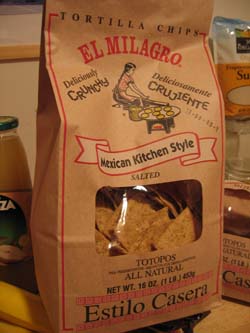 H and I were yapping about tortillas the other day and she mentioned El Milagro brand, made here in Chicago. And then she gave me a bag of El Milagro tortilla chips. Holy mackerel -- these are the best tortilla chips I have ever had. Really salty, really crispy and crunchy, not too thick, but with a strong, hearty corn flavor. Yum yum. I am sure I am getting fatter and fatter this week because I am pretty much eating these things at least 2 meals per day: with zucchini-bean-cheese saute, with chili, with green zebra/lime/cilantro salsa, and once as a quickie breakfast. Not sure where H got hers, but saw them in Cub Foods on Elston last night, and I'd imagine they are available across the city -- keep your eyes peeled for 'em.

Today we were walking on the beach by the lake up north near Edgewater, and since it was beastly f#%@ing hot and humid we got a little popsicle treat. I really don't think I would enjoy Chicago nearly as much if there wasn't such a pervasive Mexican/spanish-speaking influence. Tamarind & chili is a tangy-sweet-salty frozen delight, and there is also a mango-chili version, and a lime-salt pop. OOOH, I am so excited to try them all! 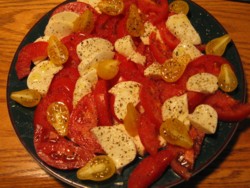 Nothing much of note to eat lately: been at a conference (hotel food), then at dance camp (camp food), and now kicking around Waltham a few days (tomatoes, then a few tomatoes, and then some tomatoes). The tomatoes tallasiandude grew ARE really good though, and quite pretty when arranged together on the plate.