while you're over there looking at the picture, check out the Questionable Content comic itself too.

everyone should read this food-policy article

This is an open letter from Michael Pollan to the President-elect of the USA, and lays out a number of steps that can, and really must, be taken in order to maintain a healthful and safe and adequate food supply for America in the coming years. (These policies have similar benefits for the world overall too, but being an American, it is of primary importance to me that we be able to trust the food we buy here at home.)

Plant a garden, shop a farmer's market, make a cheese sandwich instead of a burger: we can all do a lot of little things to fix the problems.

And send this article to as many people as you can. This is not just a foodie thing anymore.

how the chanterelles turned out

we had a little dinner party, in which everyone had a go at toothbrushing some chanterelles, and then we sauteed them up and put them on toast, alongside some salad and grilled steak. Lurvely!

Leftover mushrooms were divvied, and later we ate ours over spaghetti. The faint nuttiness of pasta is perfect with butter and mushrooms and shaved parmesan. Nom.

As previously mentioned, chanterelles in butter and scrambled egg is divine, and we had a couple of go-rounds with that tastiness as well.

They are all gone now, eaten with gusto and remembered with joy. Yum.

not about food, at least not much

OK, so i finally watched the Project Runway finale last night. I'm not going to spoil anything, but i do have one general comment.

If fashion seems to think that hips need to be bigger, to the extent that we embrace and praise poufy bubble-shaped miniskirts and tailored pencil skirts that deliberately extend away from the waist under their own power, then perhaps we ought to consider standards of beauty that include girls who actually HAVE hips. Dang.

Also, I cannot abide the girl or the rest of her collection for even a second, but i grant Kenley the right to continue existing on the strength of that feathered wedding dress, knockoff or not.

we've eaten dim sum twice in the past week, which is delightful, and i've run across a couple of new treasures that should be documented here. we didn't take photos, sorry.

black sesame jelly rolls: squishy, quivery black sesame jelly in a thin sheet, rolled up into a log. perfect dessert after a bunch of fatty savories. hard to spot, tends to be on the lower shelf of the mixed dessert/savory bun cart.

shrimp & lychee in a deep-fried crunchy noodle wrapper: another hard-to-find item. they're easy to see -- the yellow fried flat-noodle clumps are distinctive -- but we found them enclosing the shrimp/lychee filling on visit 1, but on visit 2 the insides turned out to be crab claws, shell and all.

scrambled eggs with chanterelles and parmesan

tallasiandude is feeling a little under the weather today, and he really wanted eggs for breakfast. so I whipped some up, but I figured I'd chuck in some of the leftover chanterelles, sauteed in butter, and then put a little parmesan on top, because he'd asked for cheese.

i got a little bite of this, because it smelled awfully good, and holy moly: THIS is a flavor combination that really works. The mushrooms come through very clearly, and the other nutty/creamy notes around it really show them off beautifully.

I am so making some more for myself later on for lunch. YUM.

the scent of chanterelles in fall

My dining room smells like a pine forest with all those mushrooms lying around. It's AWESOME.

holy crap. my brother went chanterelle picking yesterday, and this has arrived on my doorstep via Fedex. 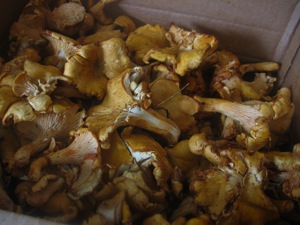 he says it is my birthday present, and i think it's one hell of a present. let's take another look: 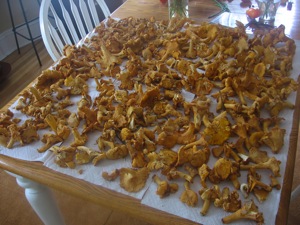 he claims that when they are this fresh, they give off enough liquid to reduce separately into a gravy with a light roux. he did say that the batch he made last night were drier than usual, so i guess we'll see how these turn out. i think i am going to just saute them, make however much gravy I can with their juices, and put them over toast.

damn. it's weird seeing so many of them all in one place. weird but GOOD.

Open the box and spread them out on some trays, a table, oven racks,
whatever. Just don't leave them mashed up in the box.

DO NOT WASH THEM. They are sponges, essentially. Just brush/blow them
off. An old toothbrush or paintbrush works well. Sorry for any slugs,
sticks, bugs, or spiders. It goes with the territory. Cut away anything
you don't like the looks of. This makes quite a mess, by the way. I do it
over the sink.

I cut them into bite size pieces lengthwise, the small ones I leave
whole. You can also chop them for recipes or gravy. The first night, I
usually make them in a pan with butter gravy. Here are the steps.

In a medium saucepan or frypan, heat maybe half a stick of butter over
med/low heat. Let the water bubble off. Add about an equal amount of flour
and keep stirred until golden brown (the color of the raw mushrooms is a
good guide). You want a light roux, so not too much flour.

At the same time, heat the largest frypan you have over high heat.
Add a little olive oil when hot, then the mushrooms. A mountain is ok, they
cook way down. It will be a little freaky at first, some squeaking,
sticking, etc. Soon, they will release their water and the pan will quiet
down. Soon, they may even be swimming. At this point of high water, dump
off all the liquid you can into a bowl. Continue frying the mushrooms until
they are soft and dark. You can even continue until they start to brown.
This is pretty much to taste, I don't worry too much about overcooking
them. You may have to add more oil or butter, or adjust the heat at some
point.

Once the roux is golden, add the mushroom juice and simmer until the
desired thickness. If needed, you can stretch it with stock or water or
whatever. Salt well, and add a little fresh pepper. Serve when the
mushrooms are finished.

I have used them to stuff chickens, put them in scrambled eggs, on home
made pizza, in ravioli, on the bbq, and in many soups and stews. You can
also dry them. I have a feeling they won't have a very long life span.